Every day goes pretty much the same around my house. At some point, my three-year-old son finds a way to make a huge mess dumping toys everywhere and then we argue and bicker and fight over picking them up.

Sometimes it’s crayons or puzzle pieces. Other times, cars or figurines. But about 90% of the time, it is the dreaded cascade of two giant boxes of Lego Duplo blocks unceremoniously dumped smack dab in the middle of the living room floor.

Cue more bickering and moaning and badgering. “At least build something with them this time instead of just making a huge mess!” “Why?! I told you not to do that!” “Not AGAIN!” Every day. Same thing.

Today I was completely fed up with the whole ordeal as my son again refused to move his blocks out of the walkway and I was intent on shoving the endlessly annoying blocks out of my way. And of course, he protested as only a three-year-old can…dramatically and very, very loudly.

I’d had it. Too stressed and too tired to yell over plastic playthings, I left the room to clear my head, leaving the mess behind. 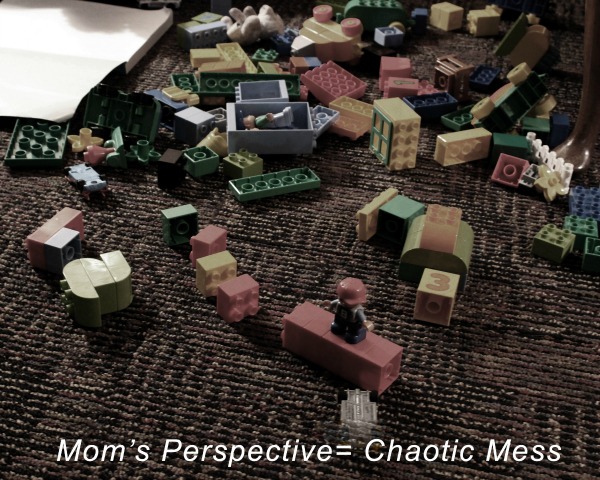 As I sat in the kitchen, I heard something magical take place in the living room.

A tiny voice started telling a very detailed story, his saga accented by the tiny jangle of the dreaded blocks as he carefully orchestrated his tale. “Hop, hop, hop! I’m coming to save you!” “Oh no, a very spooky cave!” “Help me, I’m stuck!” “Squirt, squirt! Oh no, he’s a really really bad guy! I’ll get him!”

I listened for a while as a smile slowly replaced my scowl, then curiosity got the best of me and I rejoined my son, this time getting down on his level and exploring the little world he had created. Asking questions about his precious creation and listening to his very careful explanations.

Suddenly, in that moment, it all made sense. Perhaps it wasn’t ‘just another huge mess’. Maybe it really was something important. 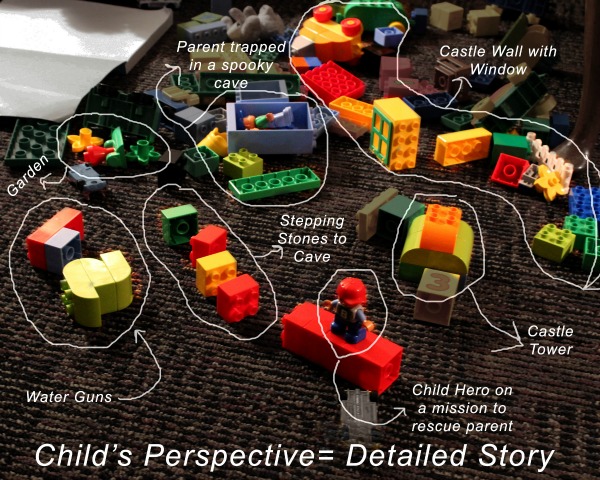 All I had to do was change my perspective before I could truly understand what he saw. Now, the crash of a hundred blocks spilling across the floor won’t herald the rolling of eyes and the start of more fighting. It will mark the beginning of another epic saga, a child hero saving the day.

This story is written by Jennifer, a member of my Facebook group, The Stop Yelling Challenge.

I read her words one day as I was scrolling through my feed.  I was inspired and within a few minutes, I had talked to her and got her permission to use her story in a blog post. Thanks, Jennifer!!

This story was a huge “Duh!” moment. A swift reminder of how important play is to children.

Just today, I had to stop myself from kicking my son’s blocks

across the room because they were in my way.  Mid-kick, I remembered that those blocks aren’t just blocks, but a city filled with cars, people, and even a shipping dock with Duplo

freight ships waiting on a big shipment.  It was more than just a bunch of random blocks.  It was a whole world that my son made.

I thought back on Jennifer’s story and remembered one word.  Respect. 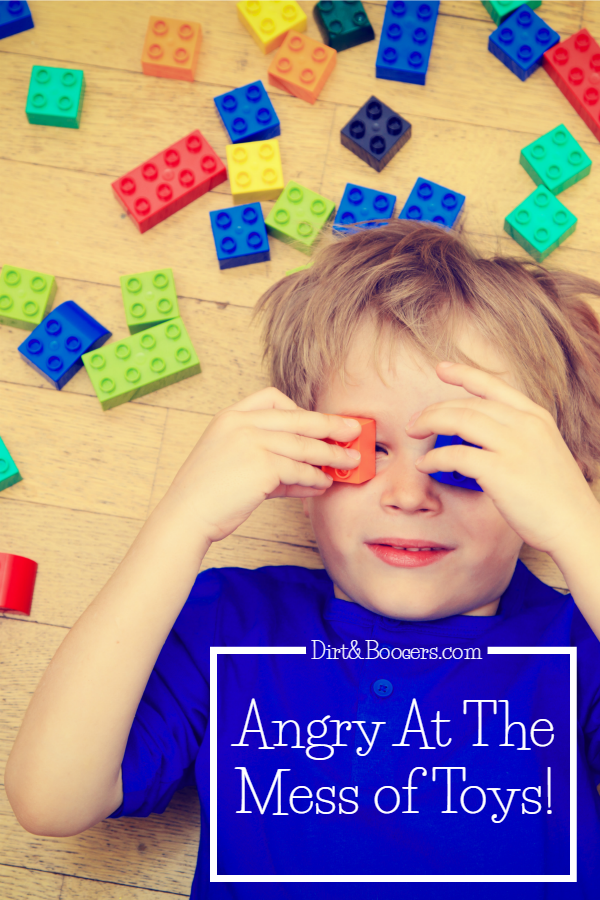 As mothers, how do we respect our children’s play while keeping sane with the mess?

Play is the work of childhood”  -Fred Rogers

Play is not just about having fun, it’s how children learn about concepts, relationships, and reasoning.  It’s how they figure out physics, social interactions, emotions, counting, colors, and letters.

Their play is important to them. It might look like a mess to us, but to them, it’s everything.

So try to refrain from:

Trust me, I know that you don’t want a huge mess in the house and you want to teach your children to take care of their things.  Well, you can, and you can do it in respectful ways.

Let Them Choose When to Clean Up (within reason)

Give them the options to clean it up now, or to do it at a set time given by you.

Let’s go back to my son’s blocks this morning.  My son had spent all morning before school working on his city.  He begged me not to let his brother tear it down while he gone.  I had errands to run most of the day and I was confident that I could keep his brother from destroying his city, so I said he could keep them up until bedtime tonight. I’d make sure his brother didn’t mess with it.

Yes, those blocks were out all day long, but he wasn’t done playing yet.  So I have him a reasonable amount of time to finish and he knows that it will be put away tonight.

Now, if his brother was going to be home all day, I would have asked him to clean up and told him I’d help him build it again after school.

Give Them Their Own Space

in my kitchen or if there are toys all over the house.

My kids have an area, that’s separated from the busy places in our house, where they can build.  We ask them to keep their toys there so that they don’t interfere with the rest of the family’s space.

upstairs they can play with at any time, but the rest stays downstairs.  They can choose to go downstairs and play, or play with the toys we have upstairs.

Prepare Them For Cleanup

My boys know that the 7pm timer goes off and it’s time for pajamas and clean up.  We also give them plenty of warnings that it will soon be time to be done.  We prepare them so they can wrap up their play and be ready when it’s time.

When you don’t give them that time, it’s understandable that they might throw a tantrum because we’re interrupting their work.  No one likes to be interrupted when they’re focusing on something.

Like Jennifer noticed in her story, most of the time there’s a lot more to a child’s play, and when you see it, you respect it.

In those moments when you want to pick up the LEGOs and hurl them across the room, remember that those little pieces of plastic are more than just a mess.  They are your child’s creation, a little piece of their world.  Respect it.

Respect their things, just like you expect them to respect your things.

More Posts For You