The biggest problem for me is the fact that my husband won’t listen to anything I bring to the table about parenting. Every time I try to talk about it, he feels like i’m telling him he’s stupid and wrong and can’t do it right, so he puffs off and we get nowhere.

I could hear the frustration in her writing as she asked me for help from her husband.

It took me back to an incident that happened in our kitchen several years ago.

I can’t remember exactly what I had said to my husband, but it was something along the lines of “You sure are getting angry and yelling a lot at our son lately.”

He looked at me and said one sentence I’ll never forget.

“You know Amanda, you seem to know everything so why don’t you just do it all?”

Then he turned around and left the room.

I wanted to parent with my husband, I wanted him to be involved.

We hadn’t been on a great path anyway.  We were both exhausted. he was working in a very stressful job, and I was doing most of the parenting on my own.

Neither one of us were happy, but I needed the yelling to stop, so I thought I’d bring up the conversation.

I was NOT expecting him to just throw up his hands in defeat, I expected a conversation.

But much like the woman from the email I received,  I shut him down before the conversation could even take place.

I learned my lesson that evening and I decided to be more intentional about how I spoke to him, and it made all the difference in the world. 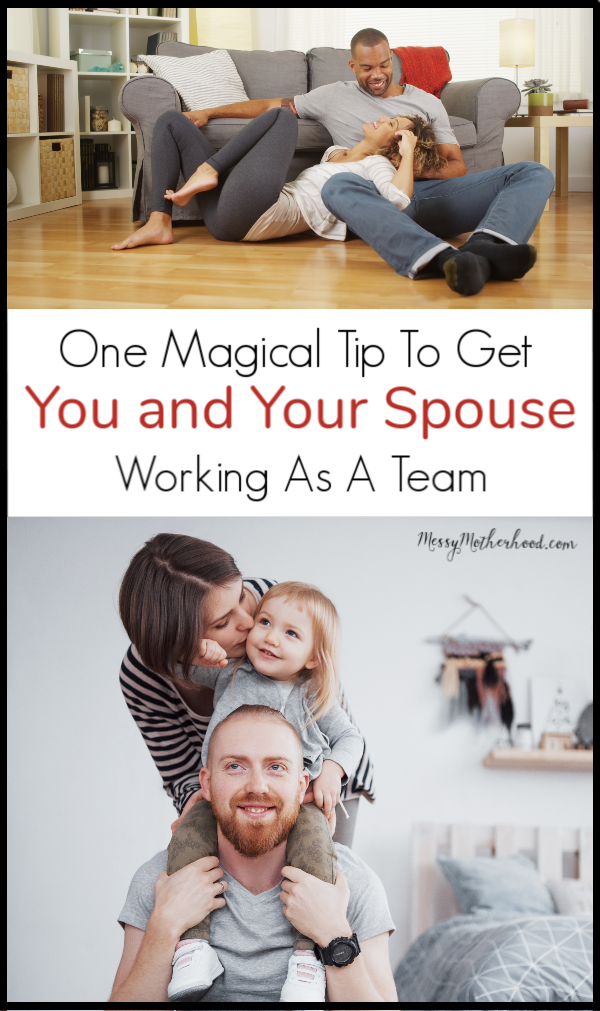 How To Talk So Your Spouse Will Hear You

As hard as it was to take…I knew that I was the reason why he was so defensive all the time.

Lucky for me, I used to be a Mental Health Therapist and I know a thing or two about communication.  I just wasn’t using those skills in my own life.

A few days later, I put my idea to the test.

I walked right up to my husband and said: “I’ve noticed that E’s been having a lot of tantrums lately, any ideas on what we can do to help him?”

He stopped and looked at me…questions in his eyes…and he started talking!

We stood there in the kitchen and calmly discussed our son and what’s been going on with him. The two of us together came up with a plan to combat the tantrums.

I felt like a million bucks after that conversation.  I had broken the code and finally started parenting WITH him instead of against him.

Here’s how we made the change.

It started with a quick change in my mindset…

I was inadvertently turning everything into a battle.  I went into every discussion with “how can I get him to see thing MY way?”

What I needed to do was find ways to get him invested in the problem and to ask for his help.

I had to switch from “get him to change and see things my way” to, “how can work with him to solve this problem?”

I had to go from a “Me Vs. You” mindset where we were in battle mode, to a “Us Vs. The Problem” so we were working things out as a team.

Just one simple switch, and here’s how that works…

“Us Vs. The Problem”

Whenever something comes up that bothers me.  I remind myself of three things…

“Hey, have you seen how grumpy J is when he gets home from school?  Any idea on how we can help him?”

“Dinnertime has been pretty rough and we’ve had to get onto the boys a lot lately.  Can we work on a plan to make it better?”

And the secret sauce to bringing this all together is knowing that I can NOT make my husband change, that’s all on him.

My actions are the only thing I have control over.  So I will change the way I approach him.

So I let go of trying to make things work MY way and instead focused on working with my husband so we could figure things out together.

And the most amazing thing happened.  My husband not only stopped throwing his hand in the air in defeat, but he also became more engaged in our marriage, in parenting our boys, and our family grew stronger.

All because of making the switch to “Us Vs. The Problem.”

Now, we parent together…side by side.  He’s my partner and we work together as a TEAM to parent our boys.

He has my back and I have his…and nothing could make me happier.