I sit across from the little boy at my kitchen table.  His parents are here too.  A full plate of delicious food in front of him and he won’t eat.

His parents push, bribe, and coax him to eat.

The 3 year old boy fiercely shakes his head and refuses.

I feel for the parents, I really do.  I can tell that they worry about their son’s nutrition and are concerned that he doesn’t seem to need food to function.

Mealtimes are a battle pretty much every day for this family.

Why Won’t My Child Eat?

Before we can talk about how to handle picky eaters, it’s important to look at why a child won’t eat.  Let’s start off easy.

Young children, especially toddlers go through picky eating stages.  It’s a normal stage that most children have.  Also, right around the age of two, children start eating significantly less than they had been over the past year.  They aren’t growing as fast, and they don’t require as many calories as before.  So keep that in mind.

Is it a hunger issue?

How long has it been since your child ate?  If he had a big snack an hour before dinner, he might not be hungry enough to eat. So, plan out snack times so that they are set parts of the day and won’t interfere with mealtimes.

Is it a sensory issue?

Sometimes certain textures make it harder for children to eat.  For example, my older son refuses mashed potatoes, but loves whole roasted or broiled potatoes.  My other son won’t eat loose kernels of corn and will only eat corn on the cob.   So practice with different textures of foods to see what your child likes and doesn’t like.

Is it a control issue?

This is the biggie my friends.  There are really very few things in a child’s life that they have full control over.  But the two big ones that we, as parents, have no control over are eating and to the bathroom.  So, when a child feels a loss of control or power in their lives, they will often times control those two things.

Feel free to read more about this concept on my post “How To Avoid Power Struggles: Choices”

So, if you’re in a battle over food, read the suggestions below. 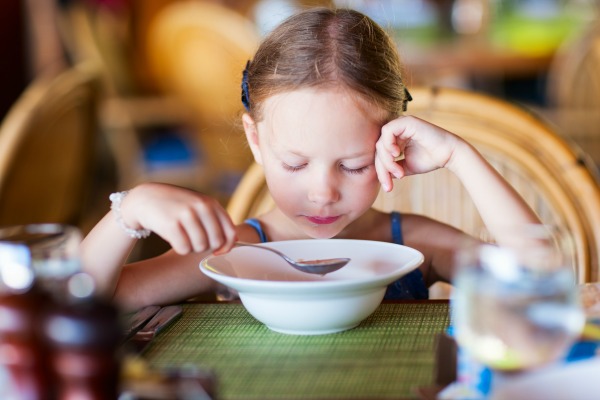 How Do I Get My Child to Eat?

When preparing meals, ask your child for their input.  “Do you want broccoli or green beans?”  Give them two choices that you are okay with them having.  A child is more likely to eat something that he chose himself.  It gives him a sense of control over what he eats.

I even allow my child to pick between two or three things for breakfast and lunch.  He gets to help me decide on vegetable sides for dinner, but I decide on the rest of the meal.

Involve Them In Meal Prep

Often times, it makes a child feel proud to be a part of preparing foods for their family to eat.  So they will be more likely to eat it if they prepared it.  They want to taste what they made.

Prepare Only One Meal

Make meals for the entire family where you all eat the same thing.  If you continually prepare a separate dish for your children, then they will learn to expect the foods that they want and will refuse to eat meals that they didn’t chose.  So, if you ever do want your child to eat what the whole family eats, then begin that way.

To make this easier, include a food or two in the meal that you know your child will like.  That way, there is something that they can eat, even if they don’t like the rest of the meal.

, where I fed them whatever the family was eating…no purees.

Truly though, Mama, you can’t control if your child eats or not, so don’t try to force the issue.  The more we push to get our children to eat, the more they will clamp shut and not eat.  It’s something called counterwill...and we all have it.

So, even though you might be boiling inside, put the choice on your child.  “It looks like you don’t really want to eat, and that’s okay.  If you chose not to eat, I’ll make sure you have a good breakfast in the morning.”

Anytime I introduce a new food to my kids, all I ask is that they take a “try bite”.  The bite doesn’t have to be big, just a little taste.  I remind them that it could taste really awesome and they’d never know if they didn’t try.  If they try and don’t like it, then I don’t force them to eat any more of it.

I do not get into a power struggle about this with my kids, but it’s not usually an issue.  I believe that the fact that I don’t keep forcing them to eat something that they don’t like makes it easier for them to just try it…or maybe it’s just my kids.

One of the biggest and worst pitfalls we can get into is giving children who refuse to eat snacks (or entire meals) after dinner and before bed.  Why in the world would a child eat their good healthy dinner when they know they can get a peanut butter and jelly sandwich in a few hours?

Trust me, I know why parents do it.  We don’t like sending our children to bed hungry.  But, they will quickly learn that to not have that hungry feeling at bedtime, they need to eat their dinner.

So those are my tips, but I’d love to know what you think.  Have you tried anything that works for you and your kids?