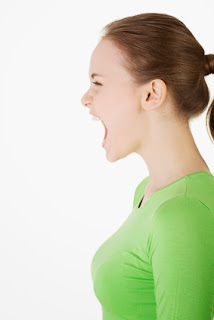 I am not usually a yeller.  I can actually go weeks, if not months, without yelling at my child.  But man, when I do yell, it’s major.  I’m not talking about “the Mommy Voice” that happens a lot.  I’m talking about the yelling where you totally lose it.  The kind where you feel, and probably look, possessed by some evil spirit.  The kind where your screaming and your kid ends up crying.  That major kind of yelling.

Well, it had been months since I had yelled and I was feeling pretty good about my current parenting state.
Then Wednesday happened…

J and I had had a really good morning.  He played well, followed directions well, and I even got a hot shower.’

Then we went to the grocery store.

In my afterglow of such a wonderful morning, I decided that J could handle walking with me and helping me shop.  I put Baby E in my wrap, gave J his special grocery list, and off we went.  Life was good…this was going to be easy!

Let me start out by saying that this was only my second trip to this store since we moved.  It’s completely different than my last store, and it is still a challenge to find everything I need.

J insisted on helping me push the cart, and I was so distracted trying to find everything I needed, that he ended up being in the middle of everything and I’m sure he bothered several other shoppers.  Because I don’t know the layout of this new grocery store, I had to zig zag across the store 3 times to get everything I needed.  It took twice as long as I had hoped.  By the time we were done, E was getting tired and fussy, it was time for J’s nap, and I was losing my mind.  I swear I said J’s name a thousand times, and I got several sympathetic looks before we got to the check out line.  I totally felt like “that Mom”.

When we get to the car, I was so frazzled that I somehow lost track of J in the parking lot while putting E in his seat.  I looked up and saw 2 cars stopped, waiting for my 3 year old to get out of there way.  I was terrified, angry, and embarrassed.

On the way home I used my Mommy Voice and reminded J of all the different reasons why he needed to stay with me.  Truthfully, I was more angry with myself than him.  I told him that I was scared and frustrated so I needed some quiet time to calm down.

He said “ok” and actually sat quietly while I listened to my music and tried to calm myself.  After a bit, I told him I was better and I went through the plan for when we got home.

I told him that his job was to clean his toys while I put E down for a nap and put away groceries, then we would get ready for his nap.  He said “sure, Mommy” and I thought “yes, some cooperation!”

Well, when we got home, the garage door decided to quit working. Great!  One more thing to do!  Just what I needed today!  Grrr!  I could feel the anger well up inside me all over again.

I brought both boys inside and reminded J of our plan.  He then started crying and whining about having to clean up.

And I LOST IT, I mean really lost it.

I yelled, screamed, and told him to get in his playroom and start cleaning up immediately!!!  I ranted, I raved, I was boiling!   I yelled so loud that my throat actually hurt.

After what felt like an eternity of yelling, I stopped in my tracks…took a deep breath…and tried to center myself.

Whoa…I needed to calm down.  My poor kid was crying, but cleaning.  He was doing his best and was trying to please me, while I screamed at him.  I could tell he was scared, of ME, and that broke my heart.  I’m supposed to be his safe place, not his scary place.

I got down on my knees so he could see my face, and this is how the conversation went:

Me: “I’m sorry J, I should not have yelled at you.  It was wrong of me to do that”.
J:  “That’s ok Mommy.  You got mad because I ran in front of the car, and the garage door broke, and you yelled because I wouldn’t clean.”
Me:  “Your right J, I was angry about those things, but that’s still not a good reason to yell.  I am so sorry.”
J: “No problem, Mommy.  You’ll try again later, and you’ll do better.”

That apology let us start the day over again.  I took naptime and focused on nurturing myself a bit (apparently I needed it).  We were able to start again that afternoon and ended the day with play and laughter.  Thank goodness for the kind hearts of children.  Their ability to forgive and move past conflicts is amazing to me.

I knew that I was angry at other things and taking it out on him., It really wasn’t him…it was me.  He was being a 3 year old kid.  He wasn’t acting any different that he usually does.  The real problem was that I was stressed and had had reached my limit.