I’m embarrassed to admit it, but I’ve been overwhelmed by the clutter in our home for at least the last two years. There have been many times I made an attempt to clear it out and made progress. If you go back through my Facebook statuses I’m afraid you’ll find one too many excited posts about shipping the kids off to Grandma’s so I could FINALLY get the job done. To be painfully, brutally honest, the job never actually got done.

When I read the Orange Rhino’s book, “Yell Less, Love More” I started taking a good look at myself and my own responsibility for my yelling and I realized the clutter makes me yell. I yelled when I couldn’t find things. I yelled when I couldn’t do anything without tripping over toys. The clutter had to go. It was bringing us all down. It’s not just about cleaning, it’s about having entirely too much stuff and it’s a problem, that for some people, isn’t as easy as wanting it to be different. For me, it’s not a problem that’s going to go away without some real effort, but when the clutter makes you yell, it needs to go.

How Did I Get Here?

I suppose I’ve always been a bit of a pack rat but it always felt manageable. I realize I keep things for emotional reasons and I’m working on figuring out how to deal with all of that now. The things I kept didn’t often overwhelm me then. I lived in small apartments and I moved a lot.  Then I had a baby. We had a system for the toys- a basket for cars, a basket for blocks and while I put him to sleep my husband picked up and sorted them back into their proper homes. 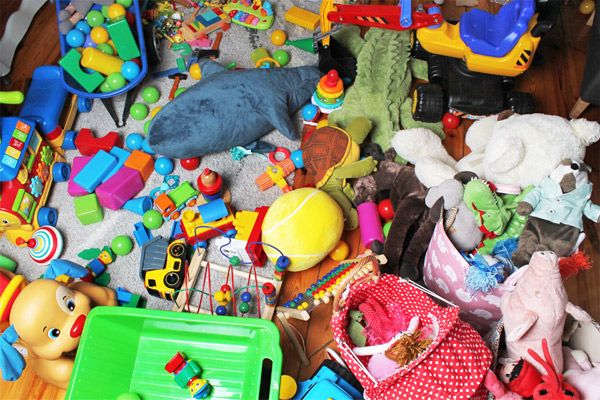 Then the “types” of toys started to outnumber the baskets.

We had sets of action figures from different shows, like Toy Story and Peter Pan. We had puzzles that came in wooden boxes with a compartment for each puzzle, with 4 puzzles in each box. The pieces were designated by a symbol on the back and my son literally destroyed every single wooden box by playing with it too rough. Somehow one box of 4 puzzles became 5 sets- with the pieces of all 20 puzzles mixed together.

Then I had another baby.

So the baby toys never went away.
And my oldest turned 3 so we bought educational games with tiny pieces and decks of cards before he was quite ready for them. His grandparents found these “busy books” with action figures and play mats that went with each story and it all fit together in the cardboard box with the book attached and decided that the kids needed EVERY SINGLE VERSION available. Batman, Thomas, Cars, Monsters Inc, Planes…. We have them ALL.

And the pieces got carried from room to room and jumbled all together and strewn across the house until nothing was where it belonged. I was too overwhelmed by it all- the mess, the crying baby, the exhaustion, the undercurrent of anxiety that now I had to keep two crazy daredevils safe, the anger at myself for not being able to handle it. Yeah, not fun.

“The mess was so big and so deep and so tall I could not pick it up, there was no way at all.” (Dr. Seuss really knows a lot about life). So I didn’t. I gave up. If I found some motivation from time to time- I shoved everything in a box and stacked it in our spare room to get it out of sight and be sorted later and later never came.

Until the room was so full it was about to burst and knowing it was there stressed me out and frustrated me even more. Every time I started to tackle it, the kids would go in there and mix everything up again.

So I locked the door and forgot about it a little longer.

I blamed the kids for the mess and my husband blamed us all. 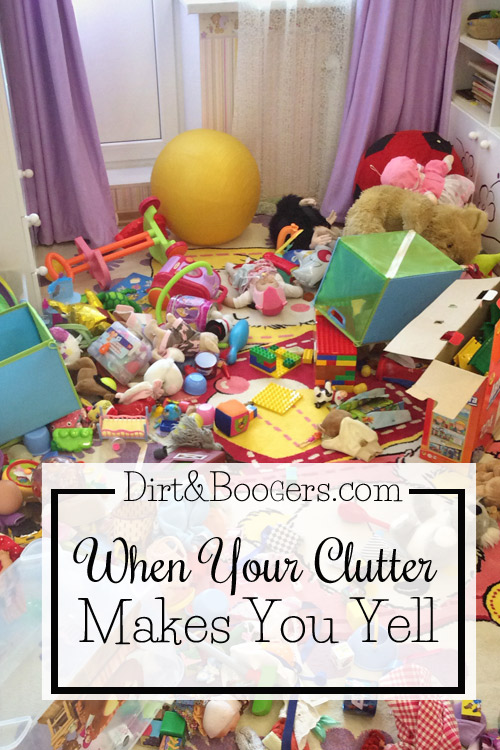 People will tell you the mess can wait- you are making memories. If you have ever saved something because someone else might need it, or because it triggered a memory, or because you felt gulity you spent so much money on it, or because someone special gave it to you or your kids- PLEASE- get yourself a system before you get overwhelmed. Rotate those toys. Purge frequently. Do Something, Anything! Don’t let ignoring it become a habit like I did.

Now I’m overwhelmed and feeling stuck. SO overwhelmed that sometimes I wish we’d move and just leave everything we didn’t want behind. I’m feeling really tired of being overwhelmed and stuck. My kids are 5 & 3… I feel like I should be past that by now and moving into smooth sailing.

So I’m starting to clear out.
And it’s so impossibly hard for me. Like so hard I sometimes just stare at it all and feel defeated before I even begin.

If you feel this way too, you are not alone.
Don’t beat yourself up.
Make a plan and ask for help.

You’re not alone. I’ve been researching some tips and found a few that make the job feel more manageable for me.

Allow yourself to ask for help…. repeatedly.

I’ve acknowledged the problem and asked my husband for patience. When I get so far and know things need thrown away but I can’t make myself do it, I walk away and tell him I really wish it would disappear and he makes it happen. I sorted out 3 totes of books, a tote of sports equipment, a tote of puzzle pieces, 2 totes of random baby supplies that need to be sold or donated, a tote of wooden trains, a tote of stuffed animals, and a tote of construction trucks. Then I hit a wall. My sisters are coming soon to help.

I used to blame people for giving our kids too much stuff and feel bad about getting rid of it. I tried to tell them not to buy so much stuff. Of course, that didn’t work. Now I tell myself that the act of giving it to the kids gave them (and the kids) joy at the time. That doesn’t mean I have to keep them around forever.

If I find Target dollar bin items that my Mother in Law buys the kids for EVERY holiday- they get trashed. I let them keep the Christmas ones until the next holiday and then I throw them away. I’m getting ready to dump the Easter stuff now. When they aren’t looking, I throw out McDonald’s toys too. I’m throwing away pieces for board games that I know I will never find the rest of the pieces for and cardboard puzzles for the same reason. Even though it pains me, ripped books are going in the trash too.

My friend, Darla DeMorrow, a professional organizer, wrote a series of posts called “Breaking Up is Hard to Do” about emotional strategies for decluttering. If you struggle with that too- Go Read it! I especially love her tip about using a paper towel roll as a telescope to put blinders on and focus on one small area at a time.

As I’ve been cleaning out I’ve also been using these mantras to help power past difficult situations….

If it triggers a memory- I’m going to try taking a picture of it instead of keeping it.
I don’t need a box full of things for my “scrapbook” that will never make it to the scrapbook.
Mementos and tokens. I’m going to lay them out- take a photo and then throw them away.

I admit, I am keeping a shelf for craft materials I collected to do projects. They are really hard to get rid of, because I see projects in my mind that I really wanted to do. Once the room is clean, if I make the time to actually complete the projects, awesome! If the stuff is still there in 3-6 months, it’s getting dumped.

I’m working on it when I feel refreshed and empowered, when I can move quickly. When I start to feel bogged down or it takes me forever to make a decision about something I stop and walk away from it.

When I had my son in 2010, my grandma (who has hoarding tendencies herself) tried to give me a bedding set from the early 90’s, brand new. Of course I didn’t want it; it was outdated. Remembering that story helps me get rid of the baby stuff now while it might still be useful to someone. I don’t want to be that old lady trying to re-home things that no one wants because it’s out of style or wasn’t taken care of. If I ever end up convincing my husband to have another baby, my family will buy us more. I don’t want that to sound entitled, but we had absolutely everything we needed when our second baby was born and they still bought more. He had to have his own, even though he wasn’t old enough to even know. So it all can go. I’m giving myself permission to “Let it go”.

I’m making progress, but I have a long way to go. I’m taking it one day at a time. You can too!

If you have any of your own tips to share, I’d love to hear them! 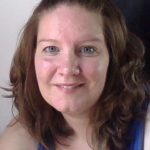 Amy Pessolano is a mom of two crazy boys and author of the blog Umbrella Tree Cafe. She strives to raise creative, unplugged kids and inspire others to live intentionally. Connect with her on Facebook or Pinterest!