The other day I was at lunch with a Mom from my son’s preschool class and we were talking about my blog and more specifically my post “Is It Okay To Be Angry At Your Kids?”

She told me that she doesn’t like to get mad at her children and instead will stuff the anger so that her children don’t see it.  She was told growing up that anger is a bad thing, so she hides it…especially from her children.

I, on the other hand, was shown as a child that when you get angry you yell, scream, and lash out.  So, my natural tendency is to yell.

Neither of these ways are really the most appropriate way of handling anger, especially towards children. 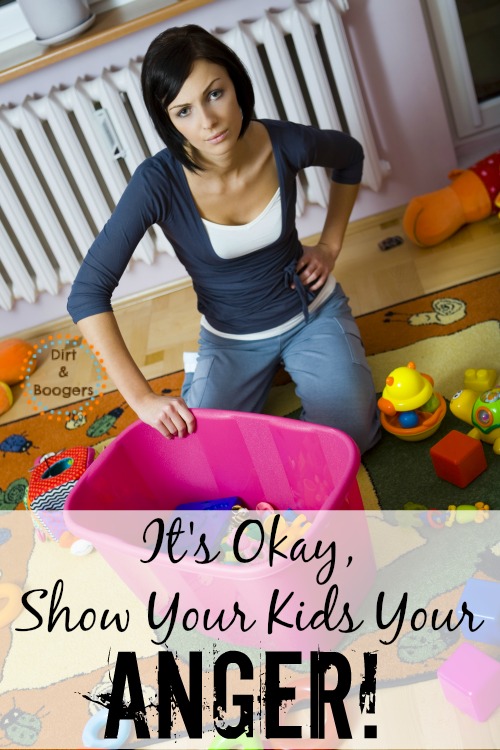 You see, children need to understand that anger is an okay feeling to have, and they learn that from watching us.

They need us to show our anger, so that they don’t get the lesson that anger is bad and should be stuffed inside, which can potentially cause a whole host of self-esteem and behavioral problems.

However, yelling, ranting and raving isn’t something that we really want to teach our children either, and it can cause self-esteem and behavioral problems too.

So, what should a parent do when they get angry?

Here’s what I do.

First, I try to stay calm, and I use my 50 Ways To Calm Down handout for this.  It’s hard to do, but with practice, it’s getting easier for me.

Second, I tell my child that I’m feeling angry and what I need from him.

“I am angry right now, so I need you to be patient with me and give me a little bit of space so I can calm down and not yell”.

Third.  I take some time to really calm myself down.  I might say a few mantras or take a few deep breaths.  When I’m really angry, I go to my room for a time-out.

Once I’m feeling calm, I apologize for anything that I might have done when I was angry.

I also make sure to let my child know that they were not the reason I was angry and I explain what had caused my anger.

Then, I let it go.  I quit focusing on what made me angry and I try to move on with the day.  I work really hard to not hold grudges or to continue to think about it.  We just move on.

So does it work?

Yes, yes it does.  Let me give you an example.

The other day my son and I were knee deep in a power struggle over something really small.

He was in the bathroom crying and I was in the kitchen trying not to lose my cool.  All I wanted him to do was to ask me for help with something instead of whining about it.  He refused to ask, I refused to do help until he did.

Right about the time I was about to really lose my cool, my son opens the door, looks at me with tear streaked cheeks, and said,

“Mom, I need you to have patience with me.  My feelings are hurt and I need to cry for a minute.  Give me some time and I promise I’ll ask you.”

Wide eyed, I said “okay…” and he shut the door and continued to cry until he was calm.  Then he came out and asked me for help.

Guys, this kid is 4 years old and he was able to name his feelings and tell me what he needed from me, because it’s been modeled for him.

Now does this happen every time?  Ha…nope!  But it’s a sign that we are both learning how to handle our anger, and that’s pretty cool.

Yelling and asking for forgiveness
Apologizing to Kids: Who’s Really Taking the Blame?
How to Stop Yelling: One Simple Tip that Works!