Inside: Learn how to organize a child’s playroom so they can learn to play independently, and so you can get a few minutes to get your stuff done too.

“Mommy, will you play with me?” I sigh, and use my favorite trick for when he asks me to play.  “Honey, I will play with you, but I need 5 minutes to finish this laundry, then I’m all yours. Let’s set a timer.”

He heads to his playroom, and not even 2 minutes later, he’s back.

Not going to lie, this is getting old.

Like all kids, my son loves to play, and he wants to play with me most of the time.

But, sometimes I don’t want to, or can’t play right when he wants me to.

I know that sounds bad, but it’s been getting really bad lately.  This kid just can’t seem to play by himself.

He has been having a very difficult time playing independently, and therefore always underfoot. He wants to be where we are and wants us to play with him all day long.

Seriously, he can’t play in his playroom for more than 5 minutes without seeking one of us out.  I know that developmentally it’s pretty normal at his age, but it was very abnormal for him…and frustrating for us. 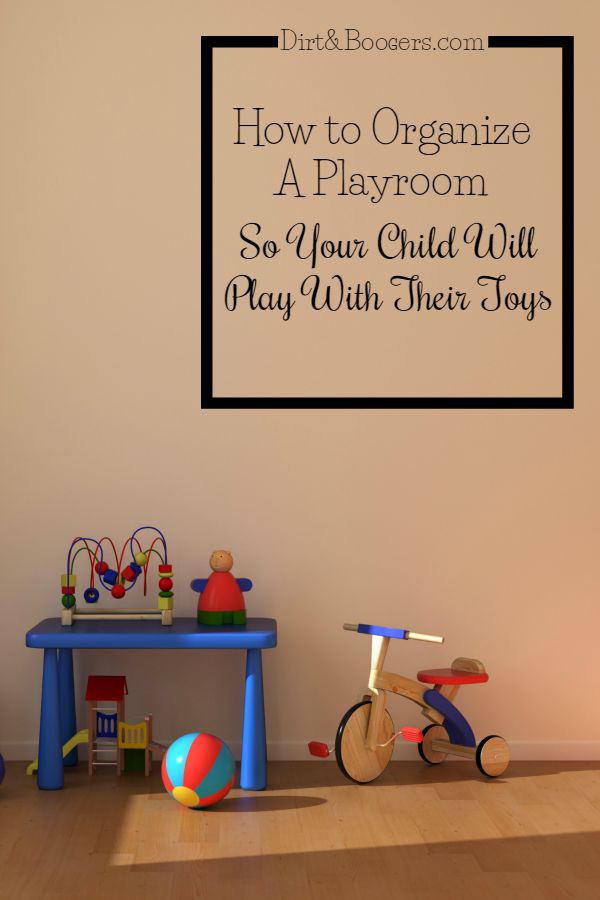 When this would happen before I would rotate his toys, and problem solved (at least for a few weeks).

However, I had rotated his toys not long ago and I saw little improvement.

I also noticed that he’s been struggling with independently playing since we moved into our new house.

One day out of complete frustration, I decided to go ahead and do another toy rotation.

In the middle of it, I stepped back and took look at his environment to see if anything needed a change.

Um, yep, there was a lot to be improved upon here.

Being a play therapist and also working in preschools for 4 years has taught me a bit about how to organize a playroom.

It was suddenly so clear why he was having a hard time playing in his playroom.

There were three major problem areas. 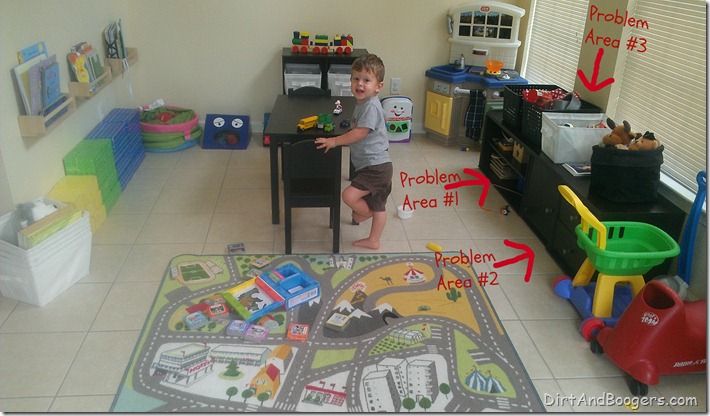 J never played with toys in here….I mean NEVER!  And really, how could he?

He can’t see what’s inside and can’t get to them without having to be on the floor.  It was just a place that he didn’t have easy access to his toys.

His cars are kept in the drawers and he will open and play with those daily.

However, the closed cabinet next to the drawers was never opened.  There were some cool toys in there, but he didn’t explore it.  Again, not an easy access to his toys.

Problem #3:  Too many toys in unorganized baskets on top of shelving.

I tried very hard to keep these organized, but because of their placement, they always felt messy and out of place.

I noticed that J had difficulty focusing on these toys and they ended up being a huge mess most of the time. 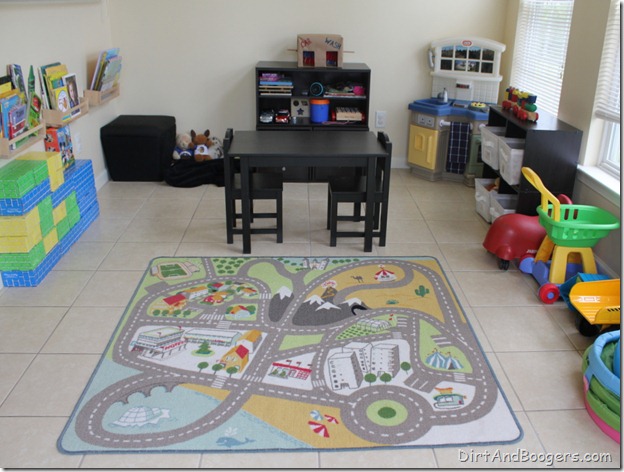 I started off by putting away a lot of toys. I tried to keep out only 15 toys, or sets of toys.  You’ll see that I went over a little bit, but there are far fewer toys out than before.  I’m still working on getting rid of more.

The first thing I did was stack the shelving on top of the drawers and cabinet.  This way the toys on the shelf are at eye level and J can find what he’s looking for. 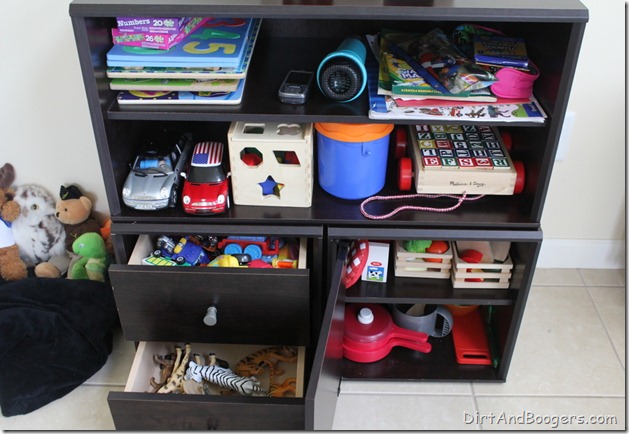 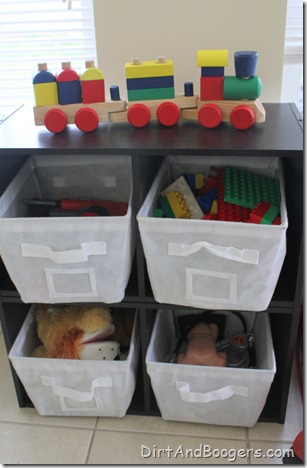 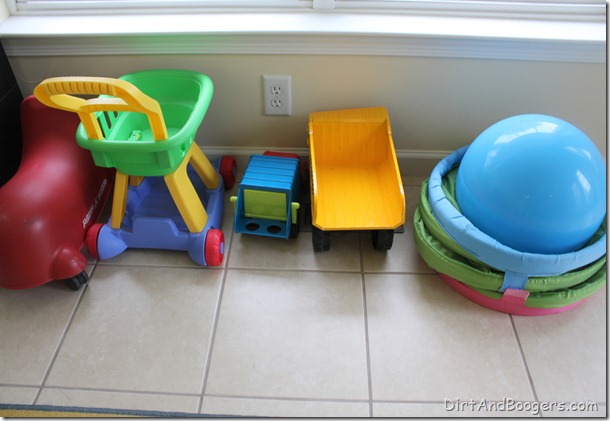 He has a lot of large motor toys and I should probably have only kept out half of these.  However, he plays with all of them on a frequent basis.  I had a hard time choosing, so they all stayed out.  This will probably change soon. 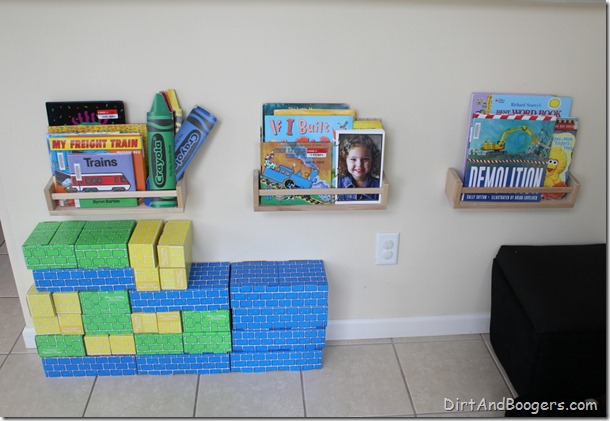 His books are on the wall next to a small reading nook (that really needs to be redone). These Set of 4 Ikea Bekvam Spice Racks

make a great place to display books so children can choose by the cover.

These Melissa and Doug Cardboard Blocks

are a favorite around here and stack up perfectly below his books.

He has more meaningful play with his toys than before the change.

He engages in more pretend play and acts out more complex scenes than I’ve seen him do in months.  It’s refreshing to see him stretching his imagination and to be fully engulfed in his play.

Before he wouldn’t walk into his playroom unless was with one of us. Now, he will play quietly for longer periods of time, several times throughout the day.

He still needs attention from us and prefers to play with us.

But, it’s developmentally normal at this age.  I’m just happier that it’s not  ALL DAY long like it was before

Tips for a kids playroom redo:

“Mommy Will You Play With Me?” How to get stuff done when a child wants you to play all day long.
3 Ways to Be Grateful For Your Spirited Child
Messy Kids Drive Me Crazy!