I’m warning you now.  If you get at all queasy about boogers and snot..do not read any further. 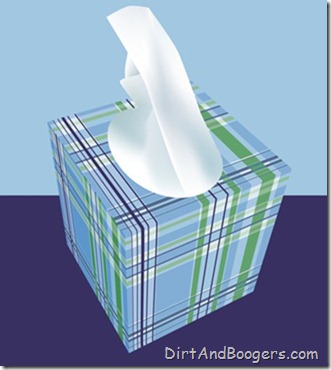 I had no idea how much of my life would revolve around dirt and boogers when I named my blog.

Let’s start with the dirt, shall we?  Not many 2.5 year old boys are what I’d call “clean”.  Even though we do try to keep J tidy, he always seems to have something on his face, shirt, pants, etc.  It feels like an endless battle with muck and dirt.

Both my boys have booger problems as the moment.  Over the past few weeks, my life has been one booger after another.

J had had two rounds of an endless runny nose.  I’ve also noticed that he’s a booger eater…super gross!  He says he likes them!  Gag me!

E on the other  hand is really the one having the real booger/snot problems.

He got RSV a few weeks back.  If you don’t know, RSV is basically just a build up of a lot of snot.  The problem is that babies can’t blow their noses and it kind of gets trapped in their sinuses and nasal passages.  So, we suctioned a lot of boogers out of his nose that week.

Well, since then, the snot has started to dry up and it’s become big solid boogers.  You know what I mean, you’ve had them.  The good pickin’ kind.

There are some pretty major issues that these big ol’ boogers cause.  First of all, they make it so that E can’t breathe.  They completely block is nostril and so he wakes up pretty angry from a very sound sleep.  Usually he wakes up slowly with a few grunts here and there, so I’m ready in the middle of the night if he starts crying.  Right now he startles awake and immediately starts screaming, which scares the bejeezus out of me and my husband.

The second problem is that the hospital grade suctioner that we have doesn’t do a great job of getting them out.  So, I have to go digging.  Gross.

E HATES it and screams his little head off…until he realizes that he can breathe again.  He then quiets down and usually smiles at me.  Yes, so glad that me picking your nose makes you feel better.

At the moment, he’s starting to get a bit snotty again.  J’s had a runny nose (again) over the past week, and I’m afraid that in spite of all my disinfecting and hand sanitizing, he may have passed something on to E.  So, I’m prepping myself for round 2.  Yay.

So, one can’t help but wonder…is this some kind of weird karma I get for naming my blog Dirt and Boogers?

One thing I know for sure is that I’m ready for my life to have a lot less snot in it.