It’s been about seven months since I decided that I needed to stop yelling at my kids.

It’s been an interesting seven months for sure.  I’ve discovered a lot about myself, my kids, and parenthood in general. 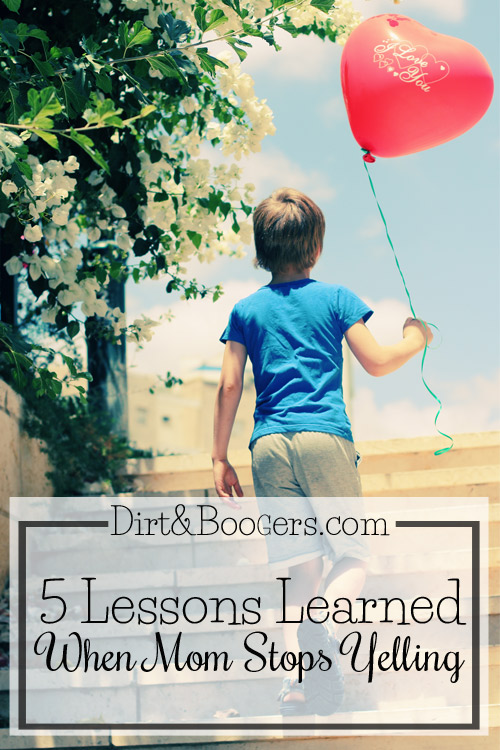 I’ve discovered that I will probably always struggle with yelling.  Even though I can’t remember the last time I yelled, I know that it will rear it’s ugly head at some point.

Life has seasons, and right now I’m happy, sunshiny, and sailing on smooth waters.  But I know that there will be a time when life will get hard, and I may not take very good care of myself.  Another Mom Funk will set in, and I’ll probably yell.

Just the other day, I had hurt my back and was in a decent amount of pain.  I swear that everything my kids did got on my nerves.

My toddler whined and cried too much.

My 4 year old couldn’t be quiet if his life depended on it.

They were making a huge mess, and were fighting me on everything.  I didn’t yell, but I wanted to…oh how I wanted to.

But if I had, it would have been okay because…

I’ve learned to forgive myself

I have yelled since taking the challenge, and the guilt was terrible.  I let down my kids and I let down my readers.  I wondered how in the world I was ever going to stop.

I had to take a step back and remind myself that I am human.  I have emotions and there will be times when I will get angry.

When I took the time to really think about it, I realized that I already was doing better.  I wasn’t as angry overall, I just had a hard moment.  I was trying and I was doing better.  Change does not happen over night, it takes time.

My kids won’t hate me and be ruined for the rest of their lives if I slip up every once in a while.

But, I’ve discovered that…

Right before I started my challenge, I wrote the post My Son Says He Doesn’t Love Me.

Our relationship was not in a good place.  We were butting heads about almost everything and he was getting very emotional.  I had tried to repair our relationship, but I was struggling.

As soon as I stopped yelling at him he got happier and more compliant.

Which makes sense.  I wasn’t scaring him every day!

Which is a great reminder that…

I set the tone

Not only did I take the challenge to quit yelling, I challenged myself to “find my happy” again.

I was in a major funk when I took the challenge and I knew that I wasn’t the happy, playful mom that I used to be.  My kids were pushing boundaries, getting on my nerves, and were upset several times throughout the day.

The most amazing thing happened when I decided to be happy….my entire family got happy again.  My kids are more joyful and silly.  They listen better and we have less tears and more laughter.

You want to know the best part?  My husband is happier.  He walks into our house at the end of the day with a smile instead of a scowl.  He’s more playful.  And get this…he’s yelling less too.

When I took this challenge and in turn, challenged others, I thought that I might get a few people to join along.  I wrote my post on a Tuesday and scheduled it to go live Friday morning.  Those few days felt like an eternity.

I remember feeling terrified for putting myself out there about my yelling.

I’m a freaking’ Children’s Therapist, and I yell at my kids!  People are going to think that I’m some terrible person.  Trained professionals don’t yell at their kids!!  What the hell is wrong with me?  People aren’t going to want to follow a parenting blogger who yells!

Friday came along and I was a nervous wreck.  I just knew no one would join my group.

But I was wrong…so wrong.

Y’all there are now over 6,000 people in the Stop Yelling Challenge Facebook Group, and we are growing every single day.  There are thousands of parents who have come to the group, admitted that they yell, and have taken the commitment to try and stop.  THOUSANDS.

I knew that people yelled, but hearing the stories and experiences of the group members normalizes it a lot.

I am not alone!

You are not alone!

I put myself out there, and THOUSANDS of people raised their hand saying “me too”.  How amazing is that?

I know for sure that I’m not perfect and this challenge enhances that.   And, I know that I will struggle with this for a while.

I’d like to never, ever yell at my kids again.  I’m not sure that that’s possible…but I’d like to try.

The side-effects are too wonderful to not try.