“You know, he’s  being a bit difficult”  is the answer I got when I asked my sister-in-law how J, my 2.5 year old, was doing.  My heart sank.  There I was, lying in bed after having, yet another, complicated birth, and my precious, usually very well mannered boy, was losing his cool. 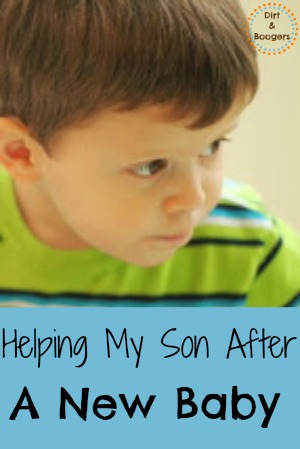 I knew when he bounced into the hospital room, that he was not ok.  He could not sit still, he needed to touch everything, could not keep eye contact, and was basically out of control.  I saw behaviors that I had never seen him exhibit before.

It had been a full 24 hours since he had seen me or his Dad.  The day before, he’d gone to a friends house for the entire day.  He woke up the next morning to his Aunt, instead of his parents.  My sister-in-law did a great job, but she’s not Mom and Dad. The poor kid felt out of control, so he acted out of control.

It made me so sad to see him that way. I knew exactly why he was acting the way he was, and I couldn’t make it better.  I knew what he needed and I couldn’t fix it.  I was stuck in a hospital bed, hooked up to a ton of machines, and sick.  For the first time in my life as a mom, I wasn’t able to assure him or help him feel better.

I have never felt so helpless in my life.

When I finally got discharged and was sent home, J was still out of sorts.  I tried to be there for him and to provide comfort, but it was hard.  I was still recovering and I had a new baby to take care of.  I was frustrated with him and, I admit, all I wanted to do was sit and cuddle my newborn. Instead, I had to deal with my crazy two year old who was bouncing off the walls.

In spite of my frustrations, I worked hard trying to get us back to normal.  I played, took him on special outings, and tried to focus just on him.  Things were  getting better.

Then, something terrible happened…

Baby E was admitted to the hospital with RSV at two weeks old.  Since I’m breastfeeding, I couldn’t leave him.

Once again, I was taken away and J got scared and out of control.  All the progress we had made in our relationship during the past two weeks had gone away.  I felt helpless again because I knew J needed some assurance, but Baby E needed me more.

This was the first time I had to put one child’s needs in front of another. 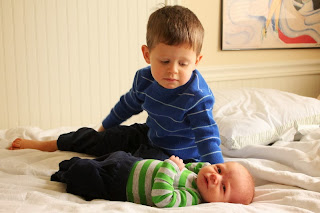 J immediately reverted back to the crazy, boundary pushing, out of control behaviors that has surfaced weeks ago.  It broke my heart. Once E was better, I needed to find a way to reconnect with J and to help him feel secure again, so I came up with this action plan for J’s behavior:

1. I put Baby E to sleep upstairs. I did this for lots of reasons.  First of all, E wasn’t sleeping very well downstairs with us, unless he was laying on me.  Once he went upstairs to his own room, he started taking solid 2 hour naps.  Secondly, having E upstairs meant that J and I could be noisy without worrying about waking up the baby.  Thirdly, this meant that J and I got 2 hours of playtime together.

2. I found ways to engage J when I nursed. I found ways to keep him engaged with me, or give him something so fun that he didn’t mind that I was nursing and unavailable.  Together, we’d read books, or look at pictures of the family on my phone.  Being an independent 2.5 year old, he loved getting his own snack and doing small chores while I fed E.  I also made sure that J was set up with something before I started nursing.

3. We planned a “Yes Morning” every week.  At least once a week I’d have a day where we stayed at home and I did nothing but play with J and take care of E.  I let J decide what he wanted to do and said “yes” as much as possible.

4. I set boundaries and kept them.  I made sure that there were firm boundaries with J and I didn’t waver.  I was very clear about what was expected from him and made sure I always explained why the boundaries were in place.
5. I played with him and let him lead the way.  I fully believe that children will use play to work out hard emotions and stressful situations, if given the space to do so.  So, I played with J a lot in the subsequent weeks.  During this play time, I did not interrupt or lead his play in any way.  I allowed him to work out what he needed to work out.  He lead the way, I was just along for the ride.

6. I made a routine and stuck to it.  J, like many kids, works so much better with a good daily routine.  With a new baby, our daily routine had to change a bit. It took a few tries to find a good routine that worked for our family, but we did it.  Now, there is a flow and ease to our day.  J knows what’s coming next and there are very few surprises.  This helps him to feel more secure and safe.

7. We talk.  I fully believe in talking with J about everything.  When he’s upset, I listen to his words and emotions.  I let him know that I’m there for him and that his feelings are ok.  I listen to his stories and we discuss all the things that are on his mind.  I allow him to tell me when I make him angry and I let him know when his behaviors are frustrating me.  I apologize when I hurt him, just like he apologizes to me.  I tell him, multiple times a day, just how much I love him.  We have an open communication with each other, and that makes all the difference in the world when it comes to his behavior.  I make sure that he always feels heard and that what he says is important. 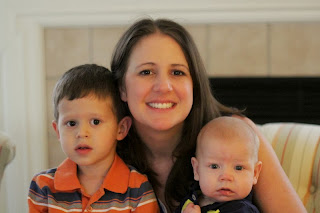 Some weeks I am able to do all of this, and some I cant.  But, I must say that J’s behaviors quickly turned around and he is back to his normal, happy self…most of the time.

I was all worried about him adjusting to the baby and worked hard to prepare him for that.  I failed to prepare him for my hospital visit.  I had no idea that the hardest part for him was when I had to go away.  To this day, he still talks about the hospital and asks me if I have to go back.  It really made an impression.